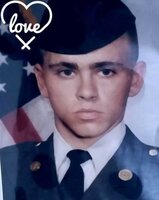 Jason Lee Pagnac was born to Leroy David Pagnac and Lauren Sue Wilkins on December 26, 1974, in Thief River Falls. He departed his earthly life on February 1, 2022. He grew up in Grand Forks North Dakota with his older sister Lisa. His mother married Gary Mathieson and together they made a home.

He grew up in Grand Forks, North Dakota with his older sister, Lisa. He went to Red River High School and joined the National Guard the summer of his senior year. On March 10, 2012, Jason married Lorri Elaine Alverson.

He loved the outdoors, adventure, sports and cars. He was baptized at Living Word Christian Center. He spent the last part of his life working for Bison Indian Motorcycle.

Jason was preceded  in death by his maternal and paternal grandparents.
He had a special relationship with Phyllis and Leo Pagnac.
He is survived by his mother, Laurie; father Gary (Leroy); sister, Lisa (and her family); wife Lorri; stepdaughter, Arianna; special friends, Chad W., Charlotte C., Steven V., and a host of family and friends.