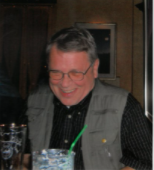 He is also survived by siblings, Mary (Terry) Schacht, Charlie (Weng), Bobbi (Tom), & Thomas, and many nieces and nephews.

Pete graduated from North St. Paul Highschool in 1960 and was a lifelong resident in North St. Paul, Minnesota with the exception of 4 years active duty in the United States Navy. He was extremely proud of his service as a Ships Fitter SFP 2nd Class Petty Officer on both the Destroyer Tender USS Tidewater and the Cruiser USS Little Rock. Upon his discharge he served 2 years in the Naval Reserves and completed trade school at St. Paul Technical College, class of 1970.. He was a member of the Pipefitters Steamfitters Local 455 for 55 years. He often claimed that he "Never worked a day in his life, because he loved what he did so much, that it was fun, not work."

Volunteer service was something that Pete valued. He became the Cub Scout master and a Den Leader of Pack 188 thru Cowern School and later Pack 49 via St. Peters Catholic School. He also coached little league baseball thru the city of North St. Paul.

In his later years Pete became a proud A.S.S.H.O.L.E. via the brewers American Society of Senior Held Over Lecherous Elders. Pete was elected "The Keeper of the Paper" i.e. the secretary for the A.S.S.H.O.L.E.'s, a title that he bragged about with a big grin and a twinkle in his eye. His other memberships included the Minnesota Street Rod Association, The North Star Chapter of Studebaker Drivers and the Bald Eagle Sportsmans Association where he helped to build several club houses and gun ranges.

His most recent and perhaps proudest role was that of the Vice President of the USS Tidewater Association where he helped to organize reunions for his fellow sailors.

Pete was a gregarious and outspoken person with a great sense of humor and a never-ending plethora of one liners and wise cracks.

We, the Schultz family would like to welcome all family and friends as we celebrate our Husband, Dad and Opa.

Sandberg Funeral Home in North. St. Paul MN on Thursday May 5, from 5 to 8pm.

Friday, May 6 at St. Peter's Catholic Church in North St. Paul. Mass will start at 11am with visitation starting at 10am.

Pete stated that he wanted a "proper Irish wake" meaning less tears but plenty of stories, good music, laughter and toasts.  We aim to fulfill this request with a luncheon at the North St. Paul American Legion 39. Lunch will be served at 1:30. There will be a cash bar.

To send flowers to the family or plant a tree in memory of Peter Schultz, please visit Tribute Store
Print
Thursday
5
May