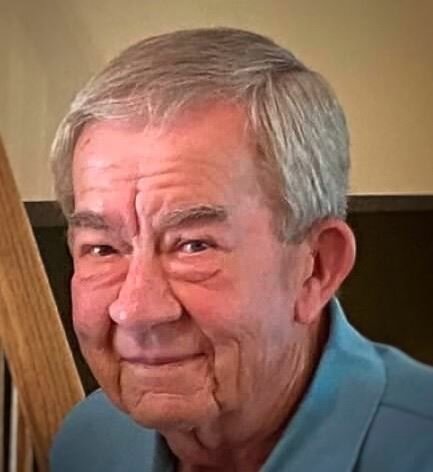 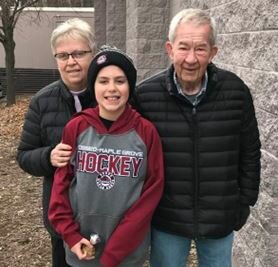 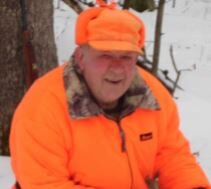 Died May 19, 2022, surrounded by family. Born May 11, 1947, in Fergus Falls, Minn., and proudly raised on his family’s farm in rural Pelican Rapids, Minn. Graduated from Pelican Rapids High School in 1965. Known for his mischievous ways, Roger somehow convinced Pelican Rapid’s longtime police chief, Merlin Rieman, to let him marry Rieman’s strait-laced daughter, Phyllis, a 1967 Pelican Rapids High School graduate. The couple were wed at Trinity Lutheran Church in Pelican Rapids on May 10, 1969, and eventually settled in Oakdale, Minn., where they raised three boys.

The family plans to have private gatherings in honor of Roger this summer.

The following was written by Jeff Bakken, one of Roger’s sons, the day Roger passed.

My dad, Roger Bakken, passed away today. He had just turned 75 last week. He’s pictured above with my mom, Phyllis, his wife of 53 years, and their youngest grandchild, Andy, after one of Andy’s hockey games last December.

My dad was diagnosed with throat cancer in 2019. Treatment kicked the crap out of him—he lost a ton of weight from chemo, and radiation of the throat is about as bad as it gets—but he became cancer free after about six months of hell. He had to learn to swallow and eat again, but he was able to get back to doing some things he enjoyed before the diagnosis.

Unfortunately, we just found out a couple of weeks ago that the cancer had come back and had metastasized. He was scheduled for a biopsy next week to determine staging and treatment options, but he didn’t make it that far. His face and throat, even his lips, swelled rapidly. His doctors told my mom to take him to the ER Monday night. There, a CT scan showed his airway was rapidly narrowing. They needed to sedate him to intubate him and put him on a ventilator. Intubating his throat—full of swelling, cancer, and scar tissue from radiation—proved difficult, and during the process he lost oxygen to his brain and went into cardiac arrest. Doctors were able to revive him and get the tube in after about 20 minutes, but in all reality, he died Monday night.

He likely was never going to wake back up and breathe again on his own. With that fact in mind, and after talking with an oncologist yesterday who told us what he was facing with the recurrent cancer—basically a painful, certain death within a matter of months, even with treatment—we made the difficult decision to remove him from life support today. We know he would have made the decision himself if he could. While the suddenness of him leaving us without getting to say goodbye stinks, he’d have chosen to go out like this in a heartbeat over slowing wasting away.

True to form for my dad, even though his face was swollen like crazy, he mowed the lawn last Saturday and aerated it on Sunday. Having a great lawn was a passion of his, so much so that he wouldn’t let me within a mile of his yard with a lawnmower. “What are you, drunk?!” he’d holler at me when I was a kid whenever he gave me a chance to try to mow the lawn. My lines were never as straight as he wanted. Anything less than an MLB ballpark-quality outfield for his lawn wouldn’t do for my dad.

My dad worked hard his whole life. He didn’t go to college, but we never went without anything we needed—or wanted, for that matter—because he always had 2-3 jobs. He worked as a lab tech at 3M for 35+ years, he was in the U.S. Army Reserve for 20 years, and he worked part time inserting ads into the Pioneer Press for 40+ years. The hours he worked in a day makes me tired just thinking about it. But he did it for us, not him.

He also lived hard. Yep, he had his vices, but he wouldn’t have lived any other way. My brothers and I have fond memories of frequently getting my dad cans of Schmidt Light from our basement fridge as kids (we’d sneak sips, and later, gulps, as we got older). When Schmidt Light went away, he graduated to the high-end stuff, Miller Lite.

He also had a thing for menthol cigarettes, of which he smoked a pack a day from high school until his cancer diagnosis. Yep, they likely played a very large role in him getting throat cancer, but they were always part of who he was, and we all get to live the way we choose.

I think he’s having a reunion tonight upstairs with all the people he loved who passed before him. He also loved and was super close with our dog, Kirby, who we had for 13 years. I imagine Kirby is sitting next to him getting his ears scratched right now as well.

We will miss my dad. He was always up for a conversation, was always on your side in whatever trouble you were facing, and he would give you the shirt off his back if you needed it. That’s the type of person he was and who I will always remember.

To send flowers to the family or plant a tree in memory of Roger Bakken, please visit Tribute Store

Share Your Memory of
Roger
Upload Your Memory View All Memories
Be the first to upload a memory!
Share A Memory
Send Flowers