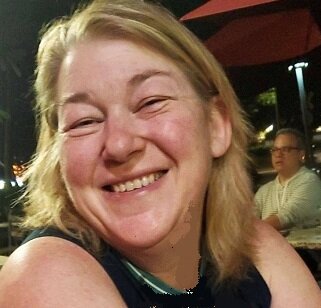 Gretchen K. (Trombley) Jeska entered eternal life May 20, 2022.  She was born June 10, 1968 in St. Croix Falls, Minnesota to Richard and Marlys (Johnson) Trombley.  Her growing up years were spent on her family’s hobby farm in Chisago, Minnesota.  A 1986 graduate of Chisago Lakes High School.  She went on to various positions until she landed on her favorite career, that of wife and mother.

Gretchen was united in marriage to Wayne Jeska, her high school beau, in 1994.  They settled in Oakdale, Minnesota and had two boys, Jacob and Luke.  As their family grew they moved to their current home in Maplewood.  Her boys were her life and she fully embraced being a “boy mom.”  Watching her boys play sports and being involved in their lives was a centerpiece of her life.

When her boys hit elementary school at St. Peter’s Catholic School in North St. Paul she became a frequent and friendly face volunteering in many different capacities including organizing the popular Polar Plunge and Mystery Bus.  Her volunteering kept on in high school as she organized a Pub Crawl to support North High School Senior all-night party. After volunteering for years, she also worked at both St. John’s and St. Peter’s.  Her love for kids led her to work not only as a lunch lady supreme but also in the before and after school programs.  She had a special gift with the children and accepted them as they were.

Gretchen was also the fun auntie and universally adored by her nieces and nephews.  She loved her brothers and sisters, but the nieces and nephews were lavished with her love and attention.  Her love and support touched each of them in a unique way making them feel safe, loved, and seen.

Crafting was also one of her passions.  She loved sharing afternoons making crafts and memories with her family and friends at “crafting parties.”  She was always up for an adventure and took many memorable “sister” trips with her sister Sue.   Her fun-loving nature was also evidenced when she spent time with her friends and family at the cabin, in Florida, and at various locations around town.

She was proceeded in death by her parents, Richard and Marlys Trombley.

In lieu of flowers Gretchen would prefer donations to the following organizations:

NDLBRescue.org (No dog left behind)

To send flowers to the family or plant a tree in memory of Gretchen Jeska, please visit Tribute Store
Thursday
26
May

Share Your Memory of
Gretchen
Upload Your Memory View All Memories
Be the first to upload a memory!
Share A Memory
Send Flowers