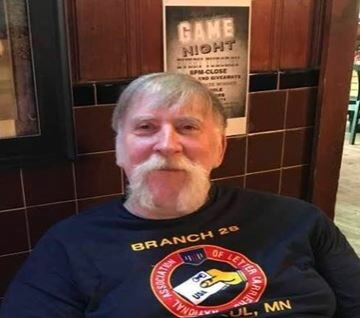 Edward Byrne, age 69, of Oakdale, passed away unexpectedly at home May 10,2022 after a lengthy illness.

Ed was born June 19,1952 at Camp Pendleton Marine Base in Oceanside, California. He grew up in Cherry Hill, NJ graduating from Camden Catholic High School (1970). He attended Univ. of St. Thomas/Univ. of MN obtaining a Bachelors in Criminal Justice.

Ed was an avid fan of college and NHL hockey. Especially the Colorado College Tigers and Philadelphia Flyers. He relished in the opportunity he had as “Stickboy” for the Flyers/former MN North Stars during his teens.

Coached Youth Hockey—Mites, Squirts, and Pee-Wees. 29-year employee with United States Postal Service until 2007. Active in (NALC) Branch 28 Union as union delegate/steward and attended several national conventions which took the family to Florida, Hawaii, New Jersey, Pennsylvania, New York, and others. Loved the mountains (especially the Rockies) and blessed his family with travel to 90% of U.S. States including Alaska (2001), Hawaii (2004), and even Germany, Austria, and Switzerland (1993).

Special thanks to Dr. Sandra Rosenberg and nurses at Health East Vascular, Maplewood.

Memorials to North St. Paul Youth Hockey for families who are unable to afford equipment for their child or donor’s choice.

You, the viewer, need to Download Zoom App possibly or might just get led to it via link above?

You may need to copy this link and paste it in your browser address bar.

Will try to have running by 11 AM

To send flowers to the family or plant a tree in memory of Edward Byrne, please visit Tribute Store
Thursday
8
September

Share Your Memory of
Edward
Upload Your Memory View All Memories
Be the first to upload a memory!
Share A Memory
Send Flowers