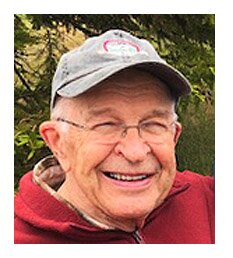 The simplest pleasures in life brought the greatest joy to Bob. He loved a quiet evening with loved ones and friends gathered around a crackling bonfire. He loved going to the North Shore taking in all of God's natural landscape in the fall, he loved hiking trails with his wife, Mary, by his side (always by his side), he loved hunting for agates and most of all he loved sipping a cup of coffee. He was also an avid aviation enthusiast and took his final flight dipping over the horizon into the eternal light on Wednesday, October 5.

Robert Henry Nickson, son of Ted and Bertha Nickson, was born August 16, 1934 in Lakeville, MN, the third of five children. Robert graduated from Tracy High School in 1952. Although college was originally not in the game plan for him, on a silly whim he decided to take the college ACT exam and CRUSHED it. The test changed the course of his life. Not only did his high school principal personally apologize to him for not realizing his full potential, but the University of St. Thomas offered him a full scholarship. His first year at St Thomas was quite an eye opener. However, he discovered he had a knack and love for numbers and decided to major in business. Tuition may have been free, but rent was not. Working part time at St Joseph’s Hospital, he met and fell in love with Mary Tepe.

After a few years, Robert decided on grad school. Before he left for grad school, Robert married Mary Tepe on July 11, 1959 at St. Peter’s Church in North St Paul. They moved to Chicago while he attended grad school at Northwestern. Moving back to the Twin Cities after getting his degree, he accepted a job offer with Roberts Automatic Products, Inc. When asked why he didn’t go for a bigger company and more money, he said “ I could make more of a difference at a small company” . He would remain with Roberts Automatic Products for over 40 years, retiring as Vice President.

He had a love for all things aviation. He relished watching airshows. He seldom passed up an opportunity to see an aviation museum. Others knew about his love for airplanes, too. The retirement gift from Roberts Automatic Products was not a watch or an engraved plaque, but a model of his favorite airplane that now currently hangs in his grandchild's bedroom.

His strong Christian faith played an important part of his life. All of his children went to Catholic grade school. He attended Bible study and volunteered at the church. He was a lector for decades, reading the scripture for the Church of St Pius X and the Church of St Peter on many Sundays. After being a lector proved a bit much for him as he aged, he used his love of coffee to make that magical elixir for the after mass social on Sundays.

It may be obvious, but it should be said that family was important to him. When his children were little, he would take them to the Minneapolis airport to watch planes take off and land (it was cheap entertainment for a man with six kids). He was proud of all of his children and grandchildren. A twinkle in his eye sparkled every time he got a chance to talk about one of them. No matter what their accomplishments were, he was always supportive of their dreams and ambitions. He would brag of his family to anyone who would listen and even to some who did not. He was solid and secure. He was someone you could depend upon and was always in your corner.

He was 88 years old. He had been married to Mary Tepe for 63 years, and had six children and seven grandchildren.

He was preceded in death by his parents; brother, Ted; and sisters, Pat, Mary Alice and Betsy.

Share Your Memory of
Robert
Upload Your Memory View All Memories
Be the first to upload a memory!
Share A Memory